The City of Edinburgh Council has granted planning permission for the development of a PBSA scheme on London Road. 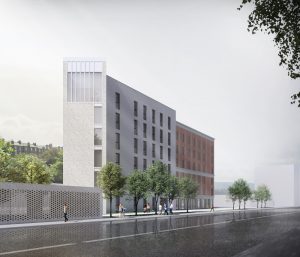 Situated opposite Meadowbank Stadium, the development at 65 London Road (acquired by SLD) will replace the existing car wash and will see the delivery of a six-storey block.

The planning application was progressed after the site was re-marketed when a previous residential development consent for the scheme could not be progressed due it not being possible to build over a sewer present on the site.

Once completed, Edinburgh-based charity People Know How will locate their headquarters on the ground floor of 61-63 London Road, closer to the communities in which they operate.

Architects 3DReid worked on the scheme and the planning consultants were Turley.

A spokesperson for HG Developments commented: “We are delighted to have received approval of our application at committee today. This high-quality student accommodation proposal will serve to redevelop a brownfield site in previous commercial use.

“The development also serves to address the increasing demand for student accommodation, fulfilling the ambitious growth plans of universities in the city, which are key drivers of the economy. This also helps to reduce pressure on the private housing market as well as delivering a substantial amount in additional expenditure into the local economy.”