Scarlett Land and Development are delighted to have acted for Platform_ together with Savills on this Edinburgh BTR site acquisition.

Platform_ has acquired a former John Lewis warehouse site in Edinburgh for its first build-to-rent scheme in the city. 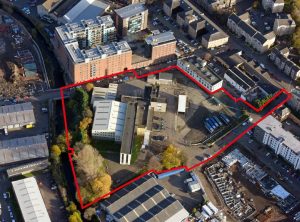 The developer has exchanged contracts with the John Lewis Partnership to purchase the 4.8-acre site on Bonnington Road Lane, two miles north of the city centre, unconditionally.

The site has planning permission in principle for 220 flats and includes the 58,000 sq ft former distribution depot. Platform_ will submit a new planning application for a higher-density scheme, but has yet to begin this process.

The warehouse was previously under offer to developer Artisan Real Estate Investors, but the sale fell through last year and the John Lewis Partnership brought the site back to the market, receiving bids in the region of £10m.

The Bonnington area has historically been used for industrial purposes, but has been earmarked for residential development in the city local plan with a number of schemes from Miller Homes, Barratt and others in the pipeline.

A spokesman for John Lewis said: “We have concluded missives with Platform_ as part of our plans to sell our Bonnington Road Lane site.”

Platform_ specialises in acquiring sites and bringing them through planning and development, focusing on major cities across the UK.

Stewart Knight, acquisitions director at Platform_, said: “The Bonnington site marks our first scheme in Edinburgh and second in Scotland, with our 498-home development in Glasgow due to start later this year.

“Platform’s aim is to create high-quality yet accessibly priced homes for rent that cater to Edinburgh’s fast-growing workforce, adding much-needed new housing to the city centre.”

The BTR developer first moved into Scotland in 2018, with the acquisition of Glasgow’s Central Quay redevelopment from Harbert Management Corporation and XLB Property. It has since received approval for a 498-home £100m BTR scheme on the waterfront.

Platform_ has a portfolio of 580 operational build-to-rent homes in a jv with Invesco.  The developer will be on site with further 1,000 units this year.