Legal & General has agreed a deal to forward-fund the development of its first build-to-rent (BTR) scheme in Edinburgh. 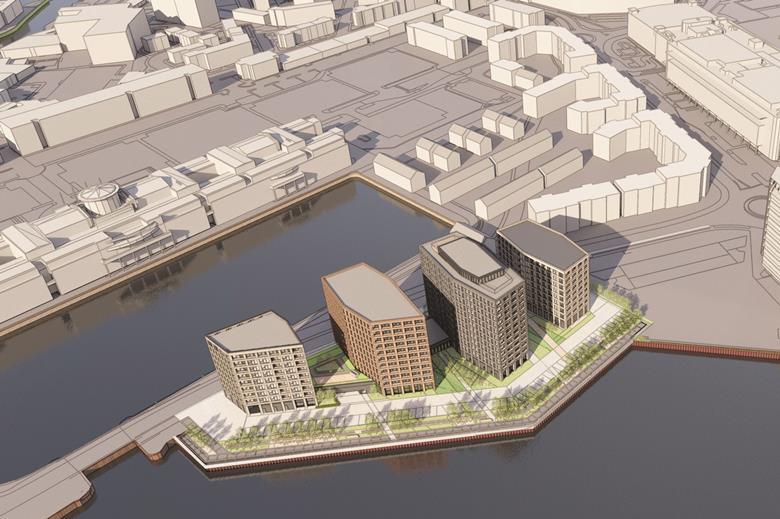 The acquisition of the 338-flat Skyliner scheme at Leith Docks is conditional on developer S1 Developments securing planning consent for the scheme.

Last week, S1 submitted plans for the development, which will comprise four towers ranging from 10 to 14 storeys. The plans include two commercial units.

They replace plans for a four-building, 245-unit residential scheme that S1 secured planning permission for at the end of last year. The new plans were designed specifically for L&G.

If the deal goes through, it would be the second BTR scheme L&G has backed in Scotland. In January, the firm announced that it was forward-funding Drum Property Group’s 324 BTR apartment scheme at Buchanan Wharf on Glasgow’s riverfront.

The mixed-use project is anchored by a 470,000 sq ft office let to Barclays.

Following that deal, L&G said Scotland “has been a key target for Legal & General as part of our Future Cities initiative”.

L&G confirmed that it had agreed to back the Skyliner scheme.

“L&G is committed to bringing forward the Skyliner waterfront regeneration site in Edinburgh,” said a spokeswoman for L&G.

She added that exchange of contracts would be subject to “a number of conditions being met”.

Plans for Skyliner, which is located next to the Ocean Terminal shopping centre and Victoria Quay, show it will have a footpath along the waterfront offering access to Edinburgh’s extended tram line, which will link the Leith area to the city centre.

Scarlett Land and Development are advising on the deal.

Will Scarlett is the founder and director of Scarlett Land and Development. Previously, Will ran the Land & Development team at Rettie & Co. for 15 years