The East End of Edinburgh is resurgent.

Perhaps more than any other development in the City, the £800m Edinburgh St. James (ESJ) development by TH Real Estate is creating a ripple effect, driving regeneration down major arterial routes Leith Walk and London Road.

In the six months since our inception, Scarlett Land and Development have played a small part with a string of deals completed.  Ten bids were received for the Forth and Playfair House office investment 2,216 sq.m (28,853 sq.ft) close to ESJ; next door (on a site sold by Scarlett whilst at Rettie) all 11 units by Headon Developments sold off plan (by Rettie) in February 2018.  At the other end of Leith Walk, Scarlett have acquired the Ocean Point hotel site for S.Harrison Developments for a development of c.200 bedrooms; neighbouring the site on Ocean Drive, Scarlett sold the Taylor Wimpey site (whilst at Rettie) in 2017 to S1 Developments – the site is now in Planning for 237 properties.  Meanwhile Cala have planning consent for 338 residential units on the site opposite.

Elsewhere in the east, Artisan Real Estate Investors have made significant progress with their New Waverley development, including the completion of three hotels and proposals for 190,000 sq.ft office pre-let to HMRC.  Scarlett advise Artisan on Residential aspects of the site (jointly with Savills and Rettie), now under offer.

Over the coming months I expect a halo effect to continue with interest in the city centre’s eastern fringes spreading out into surrounding areas.  The closure of Meadowbank stadium will trigger further regeneration, spurring new residential and student housing development.  Drum Property recently placed St.Margaret’s House under offer for £15m (Gross) whilst Scarlett are acting on a two-acre site on Marionville Road, now under offer (potential for c.100 residential units).

With a tram link from the city centre to Newhaven via Ocean Terminal looking increasingly likely, Leith stands to benefit.  Drum recently submitted a PAN for a mixed-use development at Steads Place, off Leith Walk, which will include post-graduate student housing to be operated by The University of Edinburgh (UoE).  UoE (advised by Scarlett) are actively and successfully diversifying their accommodation offering across the city with more announcements to come.  We expect the year ahead will see more UK and overseas investors attracted to the Scottish capital, driven by the exceptional quality of life offered in Edinburgh.

While there is still a reluctance for BTR/PRS in Scotland among certain funds, we are in dialogue with a significant number who are now actively seeking to commit funding.  With developments stretching from St Andrew Square and Edinburgh St James out to Meadowbank and Leith, it looks likely that 2018 will be a lively year.  Let’s hope that the effects of politics does not curtail the regeneration of the resurgent east end. 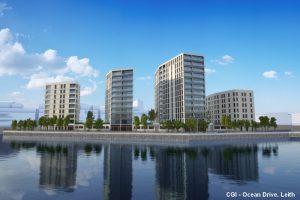